The Stone Spring Urban Development Area (UDA) was designated by the Board of Supervisors in 2015 in a delineated area along Routes 253, 280 and US 33. Subsequently, the Board adopted the Stone Spring UDA Plan January 22, 2020 as the culmination of an extensive planning process begun in the autumn of 2016. The UDA Plan Advisory Committee was established in 2016 and began coordinating with consultants Michael Baker International and Renaissance Planning to draft the plan, with input and recommendation from the County Planning Commission. The adopted plan provides a blueprint for future development based on traditional town patterns, known as Traditional Neighborhood Development and includes four neighborhood focus areas defined as: 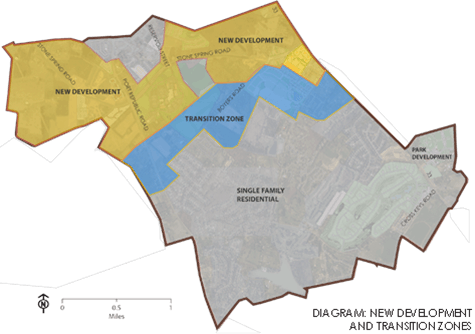 Background:
Funding of the Stone Spring UDA Plan drafting was provided through a grant from Virginia Office of Intermodal Planning & Investment within the Virginia Department of Transportation (VDOT). The grant program provides technical assistance and enables UDAs to improve eligibility for transportation funding through SMART Scale and Revenue Sharing application scoring. As a result of this grant funding, VDOT has vetted the draft plan as required by Code of Virginia.

The UDA Plan presents a vision for the development of new, walkable mixed-use neighborhoods, within the four neighborhood focus areas while preserving existing neighborhoods. Plans and development scenarios are conceptual and would be phased over the ensuing 20 years, contemplating future generations of development and adaptive reuses of certain parcels over that period. Recommended conceptual alignments, structures and functional uses do not account for parcel boundaries or topographic constraints.

Summary & Highlights:
As planned residential and mixed-use development occurs within the UDA, development will be based on the principle that neighborhoods should be walkable, achieved by compact, mixed-use development, with pedestrian-oriented development blocks that are sized for easy walking distance and characterized by an interconnected network of streets that are articulated with trees, on-street parking, and a variety of routes for vehicle traffic while facilitating walking, cycling and transit. To that end, the UDA Plan incorporates the following fundamental principles:

Protects and respects existing properties and accounts for market conditions during the implementation of the plan.

Concentrates new growth within the four neighborhood focus areas allowing the unique character of each to be preserved.

Development will also be guided by the four Transect Zones, which advocate building and development form rather than the existing focus on function. These Transects are as follows:

1.  A discernible center.
2.  Connected sidewalks with a clear pedestrian path, street tees, and lighting.
3.  Buildings placed close to the street to create a sense of place.
4.  Parking placed behind buildings and away from street frontages.
5.  Complete Streets with a balance between cars, pedestrians, and bicyclists.
6.  Create compact street blocks that encourage walking.
7.  Most of the dwellings are within a five-minute (1/4 mile) walk to the center.
8.  Greater density that includes a mix of dwelling units and commercial uses.
9.  Create Neighborhood Identity.
10.  Prominent civic and public buildings.

An Implementation & Action Chapter outlines the scope of recommended changes and reinforces accountability to ensure the Plan is effective. Many of these recommended actions will continue to rely upon stakeholders when drafting policy changes and ordinance amendments.